Infrastructure-as-a-Service: Definitions, Use Cases, and More This as a Service, That as a Service… It’s hard to keep up when there’s an alphabet soup of things as a service (Well, Things as a Service is also a thing. But we digress). Over the course of the next few months, we’re exploring some of the top processes offered as a service, starting with perhaps the easiest of the three, Infrastructure as a Service.

So where does IaaS fit? This graphic from TechTarget and IBM explains the different models of as-a-service incredibly effectively. 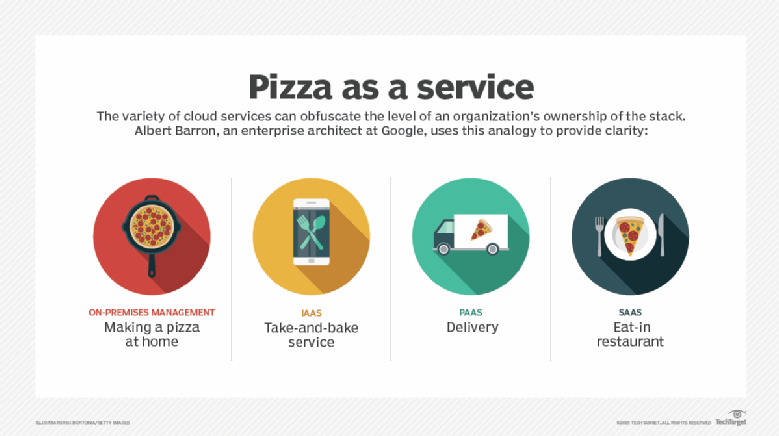 The fastest-growing of all the as-a-service offerings, cloud system infrastructure services, or infrastructure as a service (IaaS), which is forecast to grow 27.5 percent in 2019 to reach $38.9 billion, up from $30.5 billion in 2018, according to Gartner. With many businesses working toward adopting IaaS strategies, we would today like to explore this topic as we kick off our as-a-Service series.

Okay, so what does that mean? Good question. Let’s simplify that a bit.

Maybe that’s too simple. IaaS starts with a data center.

Think of your server and all that it provides. Now… Put it together with servers from other businesses in a big data center environment. Everything is kept separate, but you are able to rent whatever resources you need on a month to month basis. From here, you access this anytime and anywhere using a wide-area network such as the Internet.

For example, the user can log in to the IaaS platform to create virtual machines (VMs); install operating systems in each VM; deploy middleware, such as databases; create storage buckets for workloads and backups; and install the enterprise workload into that VM.

Key Characteristics and Benefits of IaaS

Like the take and bake pizza referenced above, your provider is responsible for the pizza—virtualization, networking, servers, and storage. You bring it home and do the baking, providing the applications, data, runtime, middleware, and operating system. Here are a few more facts about how it works.

One of the biggest selling points of IaaS is the ability to scale with your needs. In a traditional infrastructure arrangement, you buy way more than you need up front—because at some point, you’re going to need it, right? Especially in today’s technologically-enabled landscape, where data processing power needs could be incredible, it’s nearly impossible to buy your own hardware for the unforeseen needs.

This is where dynamic scaling comes into play. Not only do the resources available remain flexible from year to year, if you need something more for a busy time of year (i.e. holidays for ecommerce), the resources can ramp up at that time. The price (and amount of resources used) goes back down as you request.

How often do you buy new servers? Not that often. How often do you update the server OS? Probably when the security updates and patches come through. With IaaS, your provider takes care of this, so that you can put the newest software on it without having to worry about compatibility. As noted by Alooma, cloud service infrastructure affords you flexibility and the best equipment in the industry: the newest Intel processors, the most optimized RAM memory, petabit networking, SSD storage, arrays of GPUs, and even cloud programmable hardware.

The underlying driver for making the move from legacy on-premise enterprise data warehouse to the cloud is cost efficiency. Rather than buying hardware, maintaining it, and handling all the additional costs that come from running a data center, you remove all the up front costs and replace them with a monthly fee.

Naturally, one of the biggest fears that still exists is security. It’s actually somewhat odd when you look at it—who has more to lose? Your business, or the company who’s responsible for thousands of companies’ data? Paired with the sheer economy of scale that exists, providers of IaaS answer the call, meeting or exceeding the highest standards.

Just make sure that they stand up—not all providers are created equal. Ensure audits are up to date and providers have worked with companies in your industry.

Common Challenges and How to Overcome Them

Though nearly every business can benefit from their decision to move some or all of their infrastructure to the cloud, fewer than expected do see the benefits promised. Here are just a few hiccups to prepare for.

Though there are many benefits to the IaaS model, with an incredibly granular pricing and rental approach, you can lose track of costs and end up surprised by the bill. For example, most will charge by the user, then by the hour. Until you are used to the costs and mitigation strategies, understand that you may experience some sticker shock.

Though your vendor will handle security and often do so better than you, it’s important to do your due diligence. When migrating to the cloud, companies should obtain third-party reports, such as SOC 2, that attest to the security of the cloud organization. Additionally, pay attention to location of data, especially if you are a regulated organization.

Ensuring Your Facility is Ready

Though you can expect four or sometimes five “nines,” the percent of uptime baked into a service level agreement, you need to be ready for the entire concept of “accessing your business over the internet.” Cloud providers can promise they won’t have more than an hour of unexpected downtime per year, but if you don’t have the internet bandwidth to handle accessing it, you won’t get what you want.

Just moving to the cloud isn’t going to cure all of your woes. If your current business technology is misaligned in your data center, it’s going to be just as—if not more—misaligned when you host it. Simply put, don’t treat the decision to IaaS-ify your business as some magic bullet and you won’t walk away thinking it’s snake oil.